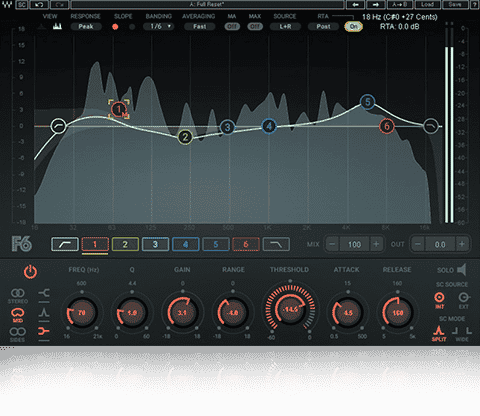 The F6 Floating-Band Dynamic EQ is a surgical dynamic equalizer with 6 driftings, fully-adjustable parametric channel groups, progressed EQ and compression/expansion controls per band, mid-side preparing alternatives, real-time recurrence range analyzer, and more. The extreme problem-solving EQ, F6 can be utilized for differing equalization, compression, development and de-existing forms, whether you’re blending or acing, within the studio or live. Each of the six drifting groups highlights progressed EQ and energetic controls that let you zero in on any issue spot – and treat it as it were when the issue emerges.

Instead of treating a recurrence one time and leaving it there for the complete track, F6’s EQ settings are sensitive to the elements of your track. This way you’ll be able to select not as it were by how much, but too absolutely when a particular recurrence will be boosted or cut, compressed or expanded. Take vocals for case: A singer’s tone changes all through an execution depending on their position to the receiver. An EQ setting that works well when the vocalist is near to the mic and singing delicately will not be as viable when the vocalist backs up and begins belting. F6 moves in time with the vocalist, kicking in when the vocal level crosses a certain limit that you’ve set and laying off when it falls underneath that edge.

With the F6, you’ll be able to EQ more accurately, with channels that can be as limit or as wide as you like, free-floating groups that can cover, variable EQ shapes, and threshold-sensitive EQ settings. F6 is perfect for confining particular issues on person tracks and settling them straightforwardly as they were when they pop out. The plugin’s progressed mid-side preparing capabilities grant you the indeed more prominent capacity to carve out EQ space in an active mix, so you’ll be able to breathe more life into your mixes.